A fund created to compensate natives for the forcible logging of their lands has spent less than 1% on the stated beneficiaries, but instead poured millions into investments through asset management companies controlled by Governor Taib Mahmud.

These are the findings of research conducted by Sarawak Report into official audits available online. Campaigners for native rights now want to know where the present sum of over a hundred million ringgit controlled by the trust has ended up and when it will be spent on its proper purpose?

The Forest Concession Area Trust Fund (LKWKKH) was created in 1985 by then chief minister Taib Mahmud in a bid to pacify native communities who were protesting the destruction of their homelands by promising them economic development. In a crushing move against Sarawak’s indigenous people and democracy, the same ordinance also threatened them with police and military action if they continued to protest the logging.

Plainly designed to counter global concerns about forest destruction and human rights violations caused by the scores of controversial timber concessions being awarded at that time, the ordinance pledged a remit of ‘Rehabilitation and Development’.

Passed by the state parliament, it allowed for a new tax to be collected by the Forest Department from the timber companies to be spent on restoring the affected areas and bringing development benefits to the people who lived there. The money would be held and distributed by the trust fund. 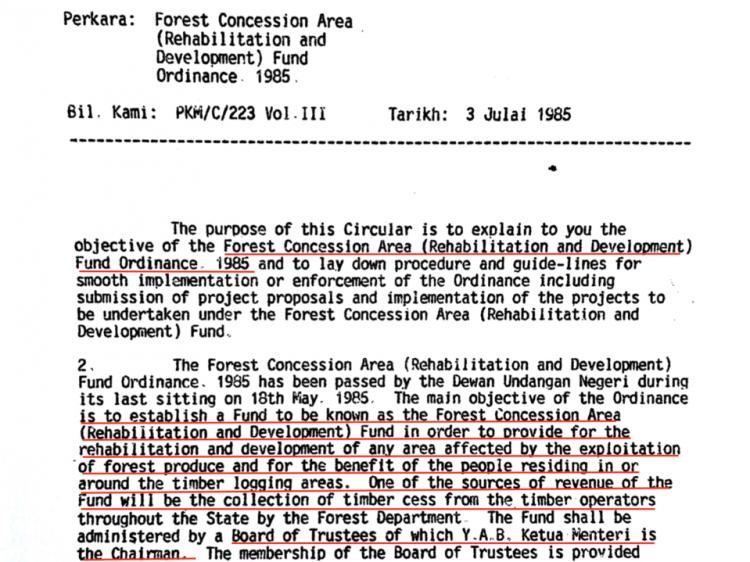 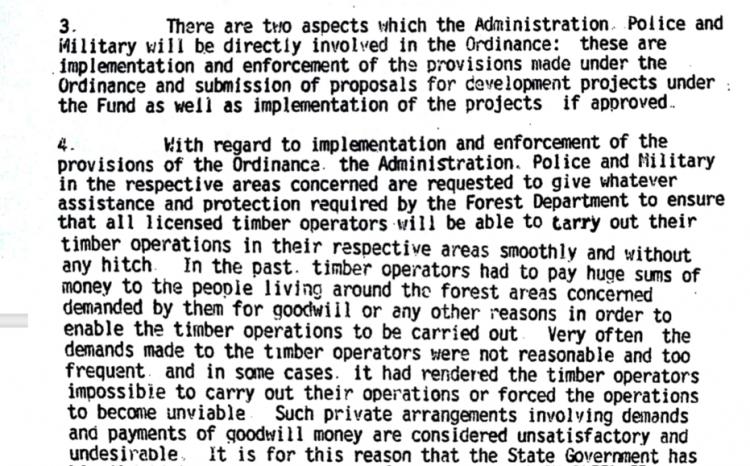 Yet, four decades later, a series of audits have revealed that less than 1% of what now totals some RM130 million has so far gone towards these reforestation and development pledges. Indeed, over several of those years less than 0.5% of the fund’s money was spent on the communities it was allegedly created to help, whilst 91% was ploughed into unspecified investments.

Perhaps few will be surprised to learn that the lion’s share of those investments were directed by the chairman of the fund, Taib Mahmud, through his own family-owned management companies.

Till this day no breakdown has been provided as to which enterprises benefited from the largesse or whether the performance of the fund justified those investments.

Meanwhile, numerous reports issued by Malaysia’s Auditor General’s office since 2010 (and available online) have shockingly repeated a stark admonishment to the board of LKWKKH over its failure to spend the money on the communities and purposes that it is legally bound to support. For example, the Audit Office wrote in 2011:

” In the opinion of the Audit, the Forest Concession Area Fund Board needs to reconsider the Fund’s investment policy as well as implement more programs for the purpose for which the Fund was established.”

In the opinion of the Audit, the objective of the establishment of the Area Trust Fund Forest Concessions have not yet been reached for the benefit of such beneficiaries specified under the Forest Concession Area Fund (Rehabilitation) Ordinance And Development) 1985 where in a period of 5 years i.e. as of 31 December 2014 only 50% of the grant amounting to RM7.43 million was used while only a total of 0.5% to 4.7% of the total funds are used for beneficiaries as specified under the Area Fund Ordinance Forest Concessions (Rehabilitation And Development) 1985.
[Audit of 2014]

This warning was repeated in similar words right up until latest available report accessed by Sarawak Report, issued in 2018. Year after year it appears that Malaysia’s Auditor Generals have been ignored.

Tell Us Where ALL The Money Went 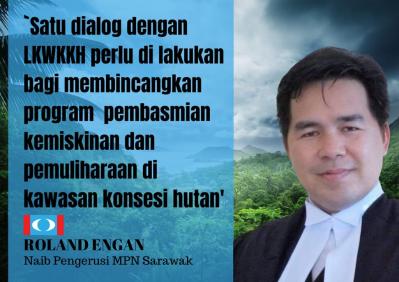 Lawyer and Baram PKR Chief, Roland Engen, called a press conference last week to raise awareness of the misappropriated funds. He is demanding to know where the millions of ringgit have disappeared.

The opposition lawyer has spent years on the ground with displaced communities who are not even aware of the existence of the fund supposedly set up to finance their own development. He says they have not seen a penny of proceeds from the fund in four decades:

“We understand that the people of Baram are the supposed beneficiaries of this fund. But we have received feedback that they do not know about the existence of this fund and even claim that they never knew or were aware of the matter.

“The fund was set up to upgrade, improve and provide infrastructure, public facilities and social and community facilities in Baram, so we want to ask where the funds have been spent since the establishment of LKWKK if it has been used,”

In a cruel acknowledgement of the fund’s true purpose, says Engan, ‘mock cheques’ or vouchers have even been handed round some of the communities representing promises of support that never in fact arrived. Such is the stingy greed of Sarawak’s present Governor and ex-chief minister.

Engan has a photograph of a voucher for a minuscule offer of 2,340 roofing pieces to one Long Laman longhouse signed off by the fund – even that paltry ‘development offer’ has not been honoured: 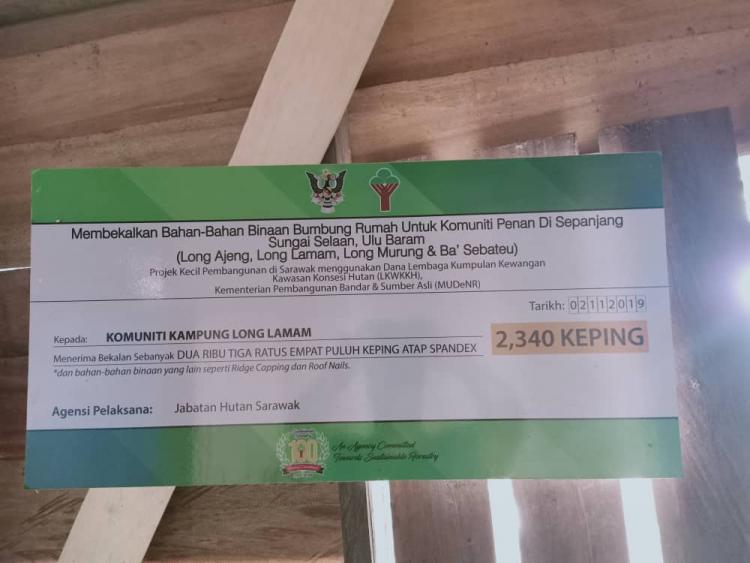 So Where Did It Go?

Sarawak Report has investigated available data on the ‘trust fund’ that has failed to deliver on its promises.

One major destination for the cash, according to the official audit reports, was yet another ‘compensation fund’ allegedly set up for local people, none other than the scandalous ‘trust’ ASSAR which has been exposed by Sarawak Report for having squandered RM500 million and for having seen a reduction in the actual value of its ringgit shares to just RM0.17.

Most of the rest of the LKWKKH money was channelled into unspecified investments by two management companies controlled by none other than the Chairman of the Trust, Taib Mahmud. The audit from 2010 explains that at that point in time the Taib family company CMS Trust Management Berhad was managing just under 60% of the available funds. 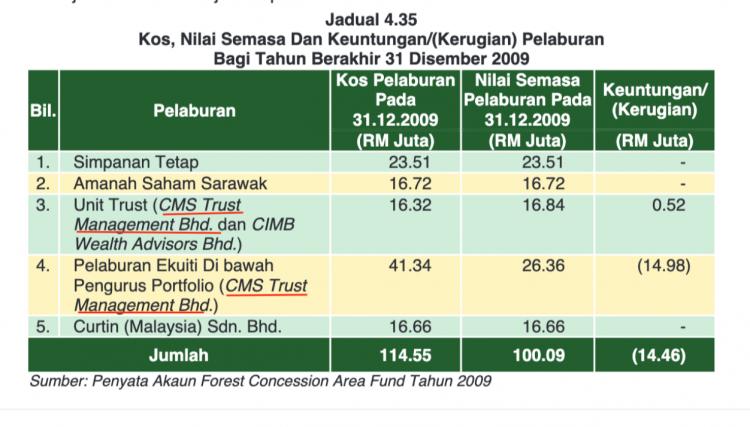 CMS Trust Management was bought over that same year by another company in which the  then chief minister and his family also held and continue to hold  a controlling interest, namely Kenanga Investors Bhd. Therefore, subsequent auditor reports record the significant holding: 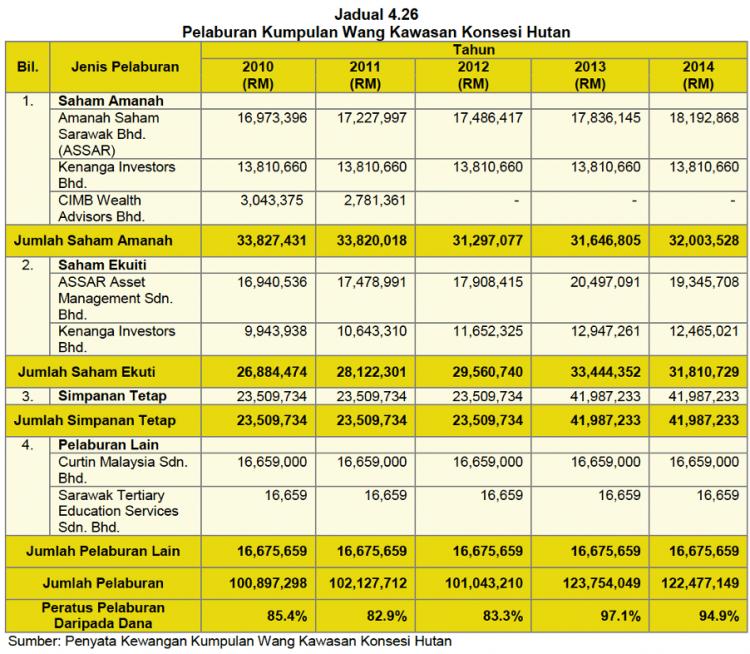 The rest of the investment was directed into the private Australian university Curtin’s campus in Kuching. Few forest folk have benefitted from that private educational facility say indigenous campaigners.

Despite the failure to produce full and proper accounts as to where these millions have actually been spent therefore, we can see from these public audits that thanks to decisions made by Taib himself as chairman of this fund, his own private family ventures heavily benefited from money that was raised to support the thousands of native peoples who were displaced by decades of exploitative logging.

Taib’s policies destroyed both their past and their future by robbing them not only of their heritage, but of their right to protest, and then of their right to money promised for their economic, social and educational development.

It is time for the full picture to be revealed. Where is the money? Where is the accountability and when will the Taib family pay it back with interest over forty years? 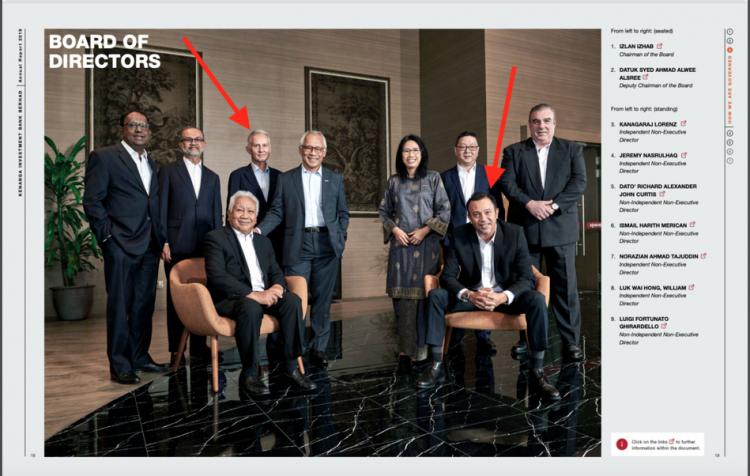