Joint Statement by CSOs Condemning the Assassination of Bill Kayong 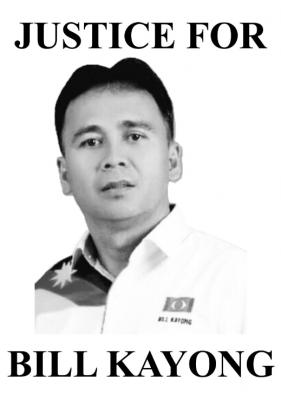 We, the undersigned Civil Society Organisations (CSOs) are extremely shocked, angered and saddened by the untimely demise of our comrade and friend, Bill Kayong from a drive by assassination yesterday morning at the traffic light next to eMart, Senadin in Miri, Sarawak.

We condemn such heinous crime and urge the police to investigate thoroughly and expediently to bring the assassin and whoever ordered the assassination to justice. This is not the first time that this sort of crime is happening in Miri City.

Within the last few years, we have seen a spate of killings throughout Sarawak, with the same modus operandi, drive by shooting by criminals and these criminals are becoming bolder by the day.

We urge the police and the authorities to take immediate and proactive action in dealing with this sort of crime by stepping up their policing activities and installing security measures such as having close circuit television (CCTV) so as to deter such crimes from happening again in the future.

We also urge the police to investigate the parties involved in the land rights disputes in which the late Bill Kayong was involved in highlighting, especially companies that employ thugs in the guise of security personnel to look after the plantation estates.

Recently, a local land rights lawyer was also threatened when he acted for an indigenous community having a land dispute with a certain oil palm plantation company in Miri Division.

The government should seriously look into the root causes of the land disputes in the state including the existing laws and policies as well as the approaches taken in dealing with any development activities that affect the rights and interest of Indigenous Peoples and local communities. In this connection, we also urge the government. to develop and put in place practical mechanisms through the involvement of relevant stakeholders to uphold the principles of the free, prior informed consent (FPIC) as stipulated in the United Nations Declaration on the Rights of the Indigenous Peoples (UNDRIP) and other international human rights instruments.

The late Bill Kayong was an activist and politician who was very vocal on indigenous land rights issues in the state of Sarawak. He was the special assistant to the MP of Miri, Dr. Michael Teo and Secretary General of Persatuan Dayak Miri (PEDAS). During the last State Elections, he stood as a Peoples’ Justice Party (PKR) candidate for the N71 Bekenu state constituency but lost. He was also very active in Malaysia’s Free and Fair Elections movement (BERSIH).

We stand in solidarity with the late Bill Kayong’s family in their most difficult time and bereavement of their loved one. We wish to express our heartfelt sympathy and deepest condolences to the family of the late Bill Kayong. His untimely death is a great loss to the Indigenous Peoples’ of Sarawak, he will be sorely missed.