The High Court today was told today that no funds from 1Malaysia Development Berhad (1MDB) were used in an oil exploration project between Petrosaudi International Ltd (PSI) with the Venezuelan government and that none of it ever flowed into the escrow account held by United Kingdom law firm, Clyde & Co LLP.

Counsel Alex Tan described the unspecified sum of monies kept in Clyde & Co as “clean” monies and which came from an oil drilling contract that PSI had entered into with a Venezuelan-based company, Petróleos de Venezuela (PDVSA), which is a lawful economic proceed.

Tan was representing PSI, its subsidiary Petrosaudi Oil Services (Venezuela) Ltd (PSOS-VZ) and Temple Fiduciary Services Limited, who are the second, third and fifth respondents in the government’s application to block PSI director Tarek Obaid, PSI and PSOS-VZ from using the monies kept in the UK law firm. 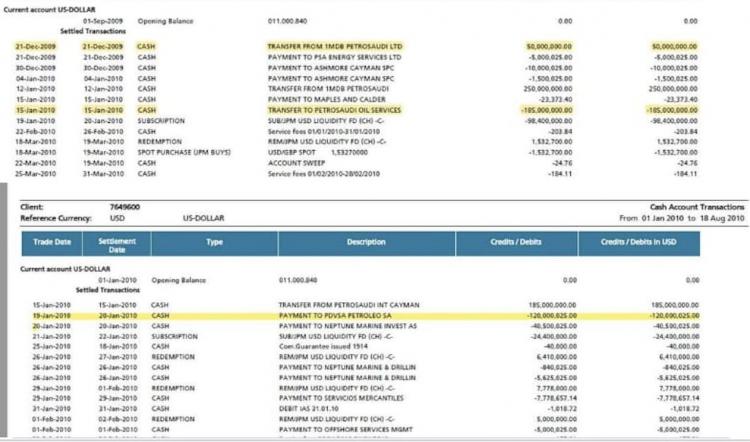 The Saudi Mega-thief, Tarek Obaid, has holed himself up in a five star Swiss sanatorium on the proceeds of 1MDB money that the US courts have allowed him to spend on lawyers and ‘his business’ – a staggering one million dollars a month – as he concocts lies to fend of the seizure of profits made in Venezuela.

Let’s be clear. On the eve of his phoney ‘joint venture’ with jailed Najib Razak and 1MDB Tarek was begging his bank manager to forgive his hundred thousand over-draft on his credit card.

Then the backhanders came in – first the $300 MILLION ‘investment’, then more hundreds of millions in loans, all of it stolen from the people of Malaysia.

Tarek’s crooked British financial advisor, Patrick Mahony, and a veritable team of British ‘professional advisors’ then ploughed this cash into another massive dirty deal in Venezuela where officials were bribed to draw up a terrible and exploitative deal whereby PetroSaudi’s clapped out drill ships (bought with the 1MDB ‘loans’) would be paid half a million dollars a day to drill for oil, whether or not any oil was produced.

No oil was produced.

Therefore, the Saudi crook and his criminal side-kick Mahony (who still lords it in fancy homes in London and Gstaad) have managed to screw over the suffering people of a second nation also, namely the public of Venezuela.

However, British judges decided that a deal was a deal when it came to honouring a letter of credit, whether or not it had been fraudulently obtained by bribing officials. The Venezuelan bankers were forced to pay over…. $340 million!!!

Fortunately, the US Department of Justice then stepped in and proved just how the money had been twice stolen from the impoverished populations of two countries. At which point Tarek’s UK lawyers Clyde & Co lost their bottle (having defended Tarek’s right to the money to the hilt till then) and passed the cash to the courts to decide.

It was a crashing blow for the conspirators who looked to be one of the big time winners from 1MDB still ranging free at large. After all, the Swiss prosecutors have pathetically and perhaps predictably faltered to a close on their actions to hold these criminals to account on the numerous crimes they are indicted with in that country (Switzerland lets off people who are rich, by and large, usually by choosing to prosecute too slowly).

However, the bitter pill was sure sweetened by that million dollars a months allowed by the US judges. How else to pay an army of eager lawyers and other ‘upstanding professionals’ who are now queueing to represent Tarek in cases like this one brought by 1MDB in Malaysia who would rather like their money back?

And what is a lie between lawyers? They are entitled to believe their client after all, as opposed to the wealth of evidence of the FBI and now the direct evidence also of Xavier Justo who ran their Venezuelan operations until he learnt the extent of the graft and corruption involved.

This was Justo’s comment yesterday as he posted the figures you see above in response to the KL court reports:

“Petrosaudi Lawyers are claiming that no 1MDB money went to the Venezuela deal.
Here you have two print screens showing how the 1MDB money ended up in Venezuela.

We know Tarek is a crook and the courts should rule accordingly and remove his cash.

The Swiss should do their duty and put him in jail.

Want to get alerts for new articles ? see our Subscribe page