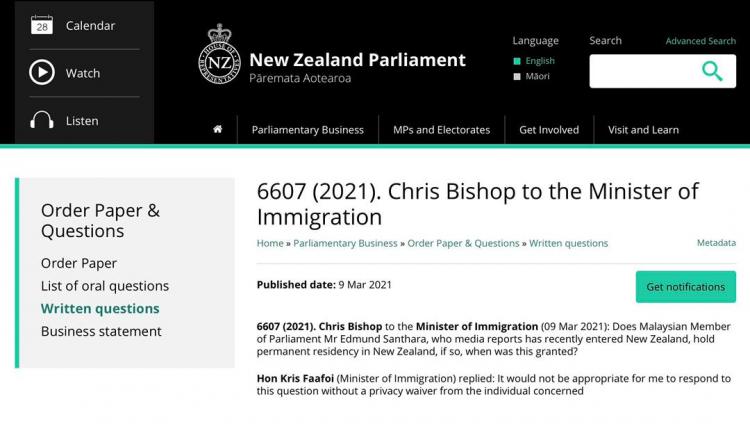 It is probable that most Malaysians, particularly his constituents of Segamat, are of the opinion that this public figure holding elected office in Malaysia and appointed as a Federal Territories minister should grant this privacy waiver as invited by the New Zealand government.

It would surely certainly make for a first for a democratically elected minister in one country to have acquired or applied for permanent residency in another. In effect, it gives him the ability to parachute out from having to abide by his own laws.

So, if Santhara has done no such thing he should speedily take the opportunity to prove it. If he has it is time to explain himself fully.

At the very least he should tell those people who voted for him whether circumstances demand he is away for chunks of every year or just this one?  He presently claims he is on unpaid ‘compassionate’ leave in Covid free New Zealand, whilst the people of Segamat suffer under lockdown, food shortages and the general incompetence of his own PN government.

Many might suspect that he is in fact just clocking the necessary period in the country to qualify for his status…. or is it for one better, a full blown passport? After all, his family live there permanently (not for them the schools and facilities provided by his own government in Malaysia) and his children appear to qualify as junior ‘parliamentarians’ in the ‘Youth Parliament’ which would imply citizenship.

This is not a suitable matter for personal privacy when we are talking about a public figure on a public contract who had failed to admit to his voting public that he had bilked the country for over three months until the matter was exposed by Sarawak Report.

He has been issuing explanations and police reports ever since. How about issuing the full facts about his status in New Zealand?