Self-Pity Is Not Pretty

I am left without defence counsel: Najib

Najib Abdul Razak said his current situation is as if he is without a defence counsel despite the apex court earlier today not allowing his lawyer Hisyam Teh Poh Teik to discharge himself.

During a press conference at the Palace of Justice in Putrajaya this afternoon, the former prime minister recorded his objection in the strongest terms of the appeal proceedings where he claimed that his right to life, liberty, and a fair hearing is at stake.

The former finance minister explained that it was as though he does not have a lawyer because Hisyam was not allowed to adjourn the main SRC appeal hearing to mount a proper defence of the appellant.

Najib contended that his defence could not be put across today and that only the prosecution was able to present their arguments. 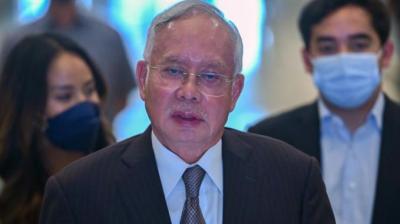 Najib Razak has presided over Rough Justice for countless Malaysians and people caught in tough circumstances in his country who have been whipped and imprisoned without mercy for petty crimes, often arising from the poverty inflicted by his own corrupted governance.

We never saw him weep for them.

He has driven his political enemies into jail to get them out of the way – for years. Unlike himself, Anwar Ibrahim was ACQUITTED on the trumped up charges laid against him. Najib was later found to have been directly involved in the trumping up process, colluding with the complainant and the chief of police BEFORE the alleged incident complained of even took place.

However, Najib would not accept that acquittal any more than he accepts his own conviction for blatant corrupt practice (one instance among so very many for which he is yet to be charged). This vindictive ex-PM shed not one tear as he tore apart judicial process and demanded that the prosecutors challenge the acquittal by the courts!

He dragged in his own dodgy lawyer to head the prosecution when the professionals in the AG chambers of the time refused.

That same dodgy lawyer has taken dodgy millions to string out Najib’s own ensuing trials for years, using all manner of dodgy tactics which have now come crashing down in the Apex court as a result of their own tangled mess.

Najib does have a lawyer. It is the lawyer he appointed. Of course, he had hoped that by appointing the lawyer he could achieve another delay to his trial in order to somehow benefit from the political outcome of a planned early election.

However, this time the judges have looked to the law and called out his tactics. He will have to live with the lawyer he appointed, which was not the latest ‘cunning plan’ of his dodgy legal advisors.

To claim that the judges have been ‘bought’ sheds more light on how Najib operated when in power than on the conduct of those he has outrageously accused. If judges can be ‘bought’ then those peculiar reversals of the original acquittal of Anwar Ibrahim, which were so blatantly orchestrated by Najib himself, ought to be the first matter to be examined.

Meanwhile, Najib’s tearful self-pity having inflicted so much grief and injustice and hardship on others is nauseating to behold.

Want to get alerts for new articles ? see our Subscribe page